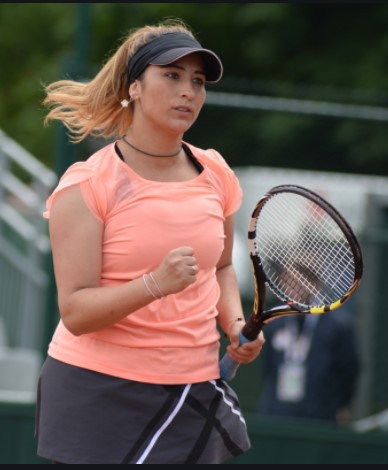 Iranian-French player Aravane Rezai had the worst possible preparation for her first-round match at the 2011 Australian Open.

The night before her match against Barbora Zahlavova Strycova her father Arsalan threatened her long-term boyfriend, who is believed to be a tennis professional, and had a violent row with his daughter.

As a result, Arsalan has been banned from tennis and Victoria police are investigating the incident. Rezai’s father, a political refugee from Iran, is obsessed with making his daughter Number 1 in the World and has a history of abusive behavior. In 2006 he was fined 500 euros for threatening one of her opponents at a junior tournament.

Rezai refused to make it an excuse for her first-round loss against Strycova in three sets but she pulled out of the doubles match she was due to play with Virginie Razzano.

She was born on March 14th, 1987 in her parent’s adopted country, France, and took up tennis at the age of 7-years-old after a stint as a ballboy for her brother Anouch who is her practice partner at tournaments.

She trained at the Mouratoglou Tennis Academy in France and was coached by Patrick Mouratoglou and her father.

She competed for Iran in the Women’s Islamic Games winning the Gold Medal in 2001 and 2005. In 2006 she achieved her best Grand Slam singles result reaching the 4th round of the U.S. Open. The following year she lost in the first round of the Australian Open.

In her first appearance at Wimbledon in 2007, she beat Shenay Perry and Francesca Schiavone before losing to Ana Ivanovic in the 3rd round.

Rezai won her first WTA Tour title in Strasbourg in 2009 and flew through the first three rounds of the French Open losing to World Number 1 Dinara Safina in the 4th round.

She got her revenge at the 2009 Rogers Cup by causing the biggest upset in the tournament when she beat Safina but lost to Alisa Kleybanova in the 3rd round. She won the inaugural 2009 Commonwealth Bank Tournament of Champions and reached a career-high world ranking of 26.

Rezai caused a big upset at the 2010 Mutua Madrilena Madrid Open when she beat four-time French Open Champion Justine Henin in the first round. She went on to beat Klara Zakopalova and Andrea Petkovic before causing another upset in the 4th round, knocking out Jelena Jankovic.

Rezai defeated Lucie Safarova in the Semi-final after her opponent had to retire. In the final, she knocked out Venus Williams in straight sets having come back from 2-5 down and it was the most important win of her tennis career.

Despite living in St Etienne, France she is fiercely supportive of Iran. She publicly stated her support for Iranian President Mahmoud Ahmadinejad in an interview with Iranian Government Television. She confirmed she presented him with two of her rackets as a gift and said she likes him because he has shown Iran’s power to the whole world and she is really proud of him.

We would like to thank you for reading this article. Find out more about Andrea Petkovic and the Best tennis players.

You can also find other in-depth reviews and buyer’s guides on Best Tennis Ball Machine.